Mac operating system’s twelfth major version is the El Capitan Installer (version 10.11). All the Mac computers which don’t have the privilege to upgrade to MacOS High Sierra or the computers that need to upgrade to El Capitan first, can download this twelfth version on the computer. This is the very last version of the Mac operating system which comes under the name OS X. And it is named as ‘El Capitan’ after the formation of a rock in the Yosemite National Park. El Capitan Installer is the post version to the Yosemite, and it was built by adding up more improvements to the Yosemite. In this version of the Mac operating system, the Apple Inc. has focused on the performance, stability, and security of the computer. Anyone who is interested can download it on the Mac PC.

If you want to upgrade to OS X El Capitan, first you have to collect gather your Mac PC and then download the El Capitan Installer. That’s what we are going to do now.

Before executing the Upgrade, you must prepare the Mac PC for the El Capitan Update. For that, gather these requirements first.

Important! It is very important to backup your important data on the Mac PC to an external storage device because it will help you to avoid the data loss issues. If any case, you forgot to backup the data, your data may be lost while executing the El Capitan Installer update. So make sure you make a backup of the device data.

How to use El Capitan Installer for a Clean Install?

This is the easiest method for the clean install. Here, you can install the OS X El Capitan Installer onto an empty volume, or you can use a storage space that has the content which no longer needed and don’t mind removing. What it matters here is that you don’t use the current startup volume as the destination here. What makes this method easier is the fact that it is possible to perform this clean install while booted from the current startup drive. You don’t need a special, custom-made startup environment for the empty volume clean install. All you have to do is, start up the installer and go.

This is the most common method of the two. Usually, the clean install process deletes the contents of the destination drive. Therefore, if you choose the startup drive method to perform the clean install of El Capitan Installer, you have to follow some extra steps as well. 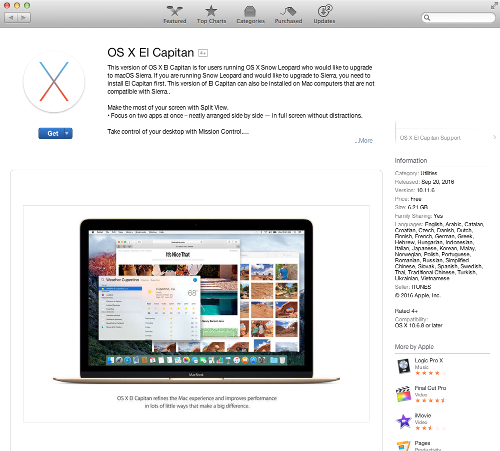 How to Create El Capitan Installer with USB?

El Capitan Installer is only available in the Mac App Store. So you can only download it from the App Store. By the way, having a USB installer to perform the El Capitan is a good idea. Because having a copy of the OS version in a separate device ensures that you always have a backup plan to install it or re-install it on the PC. When you have the USB installer with the El Capitan Installer in it, you no longer need the internet connection or the access to the Mac App Store to perform the upgrade.

“createinstallmedia” is a unix program hidden inside the OS X Installer which is provided by the Apple Inc. to create a bootable installer drive. createinstallmedia is the ideal and the easier to use tool if you are comfortable to use the terminal. This is only available for the OS versions of Lion (OS X 10.7) and above.

01. What is the best method to install El Capitan?

02. How to save previous data when upgrading the OS X?

Simply, take a backup by using the Time Machine.

Get El Capitan From The App Store Windows 10

03. Is it secure to install El Capitan without Apple Store?

Get El Capitan From The App Store Locations

Get El Capitan From The App Store Computer